Trevor Voyce capped a remarkable multisport progression by breaking through and winning the New Zealand championship in Rotorua today.
Three days after his 35th birthday, the Nelson athlete won the 50km feature race of the ThermaTech 3D Rotorua multisport festival, heading home Whakatane’s Sam Clark and two-time winner Richard Ussher.
Having finished fourth, third and second in previous editions of the race, it may have been preordained that Voyce should triumph this time around but he was taking nothing for granted.
“I guess you could say I’m consistent,” Voyce quipped. “It’s a really tough race right to the wire and you never know when someone’s going to put a burst in and overtake you like I experienced last year.
You’ve just got to go for it the whole way.”
Voyce crossed in 2hrs 43mins and 29secs, 2mins clear of Clark, with a strong 30km mountain biking leg through Whakarewarewa Forest proving crucial as he reeled in the runaway Whakatane star.
Last year, Voyce also had a chance to win before Australian Jarad Kohlar out-kicked him over the last kilometre but that wasn’t going to happen again today.
“Last year’s finish gave me plenty of motivation and also the nous that you’ve got to dig it in right to the end and you can’t be complacent at any stage.  That definitely helped me this year – I got onto the run and just thought I’d give it death.”
Clark, who is focusing more on ironman racing this year, was philosophical about the result. The pair also fought it out at the Coast to Coast this year, with Clark finishing second and Voyce third.
“He’s obviously been putting some serious work into his mountain biking and he’s been chasing a win here for a long time so I’m pretty happy for him to take it out,” Clark said.  “It’s also given me a bit more incentive to come back and win it as well though.”
It proved a vintage day for Nelson athletes, with Elina Ussher taking out her third title in the women’s division, beating 2013 winner Simone Maier (Wanaka) by 35secs.
“I had a pretty good paddle and was leading after the kayak and then I just went as hard as I could for as long as I could,” Ussher said. “I knew that the young, fast, pretty girls were chasing me pretty hard!”
Ussher crossed in 3:07:52, with Maier clocking 3:08:27 and Emily Wilson (Cambridge) third in 3:20:09.
Clark wasn’t the only Whakatane athlete to feature, meanwhile, with 17-year-old Hayden Wilde nearly claiming the biggest scalp of his fledgling career.  He finished fourth in the men’s race – winning the under-19 division – and was just 20secs adrift of five-time Coast to Coast winner Richard Ussher. 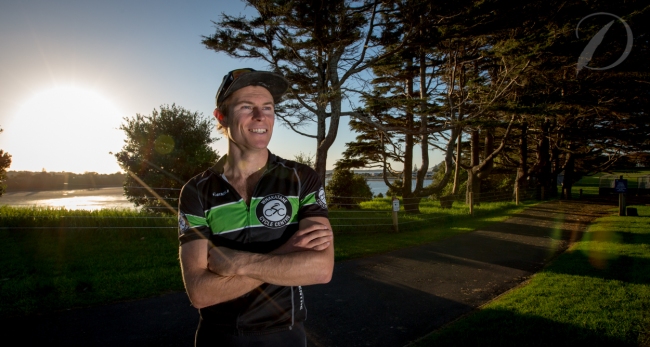 In the past year, Sam Clark has been a cyclist, marathon kayaker, ultra-marathoner and frustrated patient.
Next week, at one of his favourite races, the talented Whakatane athlete finally gets to be a multisporter again.
Clark is one of the more intriguing entries for next week’s Thermatech 3D Rotorua Multisport Festival, where the 23-year-old will line up in the feature 50km New Zealand multisport championship race against the likes of five-time Coast to Coast winner Richard Ussher.
Fourth in last year’s Coast to Coast and having pushed Ussher hard at the 2013 Motu Challenge, Clark went back to the multisport drawing board this year, rebuilding his running legs by joining the burgeoning stable of Tauranga coach and former Commonwealth Games marathoner Craig Kirkwood.
He led for 20km of March’s Tarawera Ultramarathon and finished the Rotorua Marathon earlier this month in 2hrs 39mins, good enough for 14th place, instilling confidence that he’s on the right track.
“Craig got me on track for the marathon and has organised a few really painful sessions,” Clark explained.  “It’s been a good start to my season getting some quality training under my belt, under the guidance of a quality coach.  He’s an old-school runner who knows it’s only going to pay dividends if it’s going to hurt. I’m really targeting a big performance at next year’s Coast to Coast and Braden Currie set the bar really, really high on the run leg this year and showed what needs to be done. Competing in the marathon is part of that, trying to raise my basic running speed to be able to get close to the likes of him.”
Though he hasn’t ridden a bike in anger since November’s Tour of Southland, Clark has also noticed the increased running focus has boosted his performance on two wheels, while he’s recently completed the King of the Harbour surf ski race and the New Zealand marathon kayaking championships at Karapiro.
The 3D race features a flat 9km kayak leg on Tikitapu (formerly the Blue Lakes), followed by a 30km mountain bike leg through the Whakarewarewa Forest and an 11km forest run to finish.
“It’s probably the most fun multisport course in New Zealand at the moment and the mountain bike leg would arguably be one of the best in the world.  The nasty, horrible, hilly run at the end to finish things gives it a little bit of everything and this race will be a good indicator of where I want to be for the next six months.”
Although defending champion Dougal Allan (Wanaka) will be missing next week’s race, Ussher, Clark, Nelson’s Trevor Voyce and Luke Osborne (Hastings) will ensure a quality battle at the pointy end of the field, while two-time winner Elina Ussher, Rotorua local Nic Leary and Christchurch-based Dane Sia Svendsen headline the strong women’s field.
The dark horse in the female ranks could be New Zealand surf lifesaving representative Danielle McKenzie, who won the 3D grassroots 25km multisport race as a schoolgirl two years ago and returns for her first crack at the longer distance.
She’s proved the longer distances are to her liking, having won December’s inaugural Mount Monster, a 25km ocean-based ironman race along the Mount Maunganui coast.
The annual Queen’s Birthday Weekend multisport festival, now in its fourth year, continues to expand, with nearly 1000 entries last year across the wide range of family-friendly events and boasting $75,000 in prizes and giveaways. Event director Neil Gellatly has also introduced a dedicated paddle-boarding division this year.
“Competitors have always been able to use any craft in the water stage but we’re keen to recognise the surge in SUP usage around the country,” Gellatly explained. “They’ve now got their own dedicated division in the 25km grassroots race and we’re keen to showcase our magnificent Rotorua playground to a new group of athletes.”
Gellatly has also noticed a strong family focus in entries this year, with multiple members of some clans – Mum, Dad and kids – all entering the festival.
People love all the options we have on offer and we warmly encourage whole families to come along and find a distance that takes their fancy and challenges them. The family that plays together, stays together and everyone who has been here knows there aren’t many better places to play as a family than in the heart of our giant Rotorua playground.”